Hundreds of thousands of public- and private-sector workers waged a massive national strike throughout Morocco yesterday to protest the government’s unilateral approach on pension reforms, including moves to increase the retirement age, and its unwillingness to engage in dialogue with unions. Nearly 85 percent of workers joined the strike, according to union federations whose members took part, with teachers, health care workers, local government employees and port workers turning out in force.

“The strike is a message to alert the government to the seriousness of the current social situation and to meet the demands of the working class,” says Mohamed Atif, communications officer for the Democratic Labor Confederation (CDT). The unions, whose members hold a sixth of the seats in parliament, say they will block a government draft bill making pension changes.

Workers took the action after repeated calls by unions to begin negotiations went unheeded. Unions say they want to draw attention to the deteriorating economic conditions of Morocco’s working class, made worse by government’s halt to fuel subsides and violations of worker rights, including the right to strike. 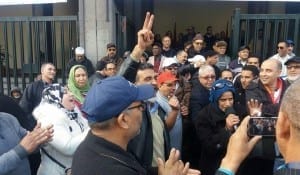 Unions called on airport workers, emergency health workers and others in key sectors to stay on the job but to wear red armbands in a show of solidarity with strikers.

Moroccan workers received widespread international support for their walkout, with theInternational Trade Union Confederation (ITUC) calling on the government to have a meaningful dialogue with unions.

“The Moroccan government is refusing to listen to its own people—the women and men who create wealth and sustain society and the economy,” says ITUC General Secretary Sharan Burrow. “The ITUC calls on the government to step back from its anti-social and confrontational approach, and have a meaningful dialogue with the unions.”

The IUF, the global union for food workers, denounced the government’s lack of willingness to negotiate with workers and called for greater respect for basic democratic principles and the rights of unions.

In addition to the CDT, major federations calling the strike include the Moroccan Labor Union (UMT), the General Union of Workers of Morocco (UGTM) and the Democratic Labor Federation (FDT). The National Union of Higher Education (SNEsup) also played a big role.