Women in Media: 1 in 2 Experience Violence at Work

Nearly one in two women journalists have experienced sexual harassment, psychological abuse, online trolling and other forms of gender-based violence (GBV) while working—yet “up to three-quarters of media workplaces have no reporting or support mechanism,” says broadcast journalist Mindy Ran, citing results of a survey survey released this month by the International Federation of Journalists (IFJ).

Ran, IFJ Gender Council co-chair, overviewed the survey findings yesterday at the panel, “Challenging Impunity and GBV against Women Journalists and Media Workers,” one of dozens of parallel events taking place this week in conjunction with the 62nd session of the United Nations Commission on the Status of Women (CSW) in New York City. 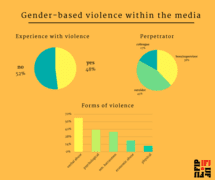 “It is clear that the current approaches have had limited impact. We’re here to get practical,” says Ran, who opened the panel which included six experts in media and gender-based violence from around the world.

Journalists, like other workers, also experience gender-based violence outside their workplace while doing their jobs. The IFJ survey of 400 women in 50 countries found that 38 percent of perpetrators were a boss or supervisor and 45 percent were people outside of the workplace (sources, politicians, readers or listeners). Thirty-nine percent were anonymous assailants, such as through cyber bullying.

Mexico, one of the most dangerous countries in the world for journalists, has seen a “severe increase in violence against women journalists both online and offline,” says Aimée Vega Montiel, a research specialist in feminist communications at the Universidad Nacional Autónoma de México and vice-president of the International Association for Media and Communication Research (IAMCR). Yet there is a “cycle of impunity” and “media companies are not ensuring safety for women journalists,” she says. 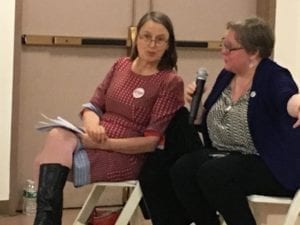 Marieke Koning from the ITUC and the CLC’s Vicky Smallman joined the IFJ discussion on gender-based violence at work. Credit: Solidarity Center/Tula Connell

The Solidarity Center has joined the campaign, which Koning says can give momentum to gender equality activists around the world, as did the years’ long effort leading to passage of the 2011 ILO Convention on domestic workers’ rights. Like the domestic workers’ campaign, which built powerful support networks around the world, Koning says, “we want to build alliances to pass the gender-based violence convention.”

Male Media Control ‘Should Be Next on Feminist Agenda’

Domestic violence also impacts those at the workplace, and Vicky Smallman, director of Women’s and Human Rights, Canadian Labor Congress (CLC), shared details of a CLC survey of more than 8,000 union members that found 67 percent had experienced domestic violence. Of those, 47 percent say they were prevented from going to work by their abuser and eight percent lost their jobs because of ramifications from their abuse.

Several panelists discussed how the lack of data on women’s experiences in the workplace, and the rates of specific forms of gender-based violence at work hamper efforts to define and address the issues. Carolyn Byerly, chair of the Howard University Department of Communication, Culture and Media Studies, described the lack of representation by women in the media documented in Global Report on the. Status of Women in the News Media. As principal investigator of the report, Byerly says the gender imbalances are still valid 10 years after the report was published.

Byerly and others also warned that media consolidation is creating a global web of male structural power that further exacerbates inequities and inequalities in newsrooms and in media coverage.

“The challenge we face is men’s control of media industries. The problem of media conglomerate is rampant around the world and is growing. We must put media ownership control on global feminist agenda,” she says.

Gunilla Ivarsson, former president of the International Association of Women in Radio & Television, discussed the association’s security handbook developed with a focus on women journalists, and ended the program, saying:

“I think we all have been affected in one way or another. It’s important for us to go to action for change.”