Participants in Monday’s final session of the Solidarity Center labor migration conference engaged in a lively discussion with panelists in a discussion of migrant workers’ vulnerability to gender-based violence.

Lisa McGowan, senior specialist for gender equality, outlined the broad picture, pointing out that gender-based violence is “one of the most widespread human rights violations in the world,” and migrant workers are especially at risk of gender-based violence because they are often invisible. 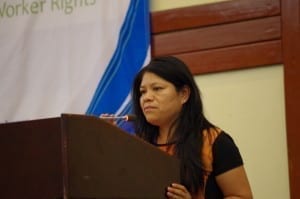 Describing her work organizing and supporting domestic workers, many of whom are migrants, Marcellina Bautista, the leader of the Center of Support and Training for Domestic Workers (CACEH), said that “domestic workers suffer violence for being women, migrants and indigenous people.”

“The majority of the 2.3 million people in Mexico who do domestic work are women and girls” who are highly vulnerable to gender-based violence, says Bautista, who also serves as International Domestic Workers Federation (IDWF) regional coordinator for Latin America.

The CACEH works with domestic workers who face workplace violence, helping migrant workers understand that they have the same rights as other workers in Mexico.

Farm work is another sector where women workers are especially vulnerable to gender-based violence, and Agatha Schmaedick Tan discussed the Coalition of Immokalee Workers’ (CIW) efforts to end sexual harassment and violence among tomato pickers in Florida. Tan cited a study that found some 80 percent of female farmworkers had experienced sexual harassment at work in 2010. 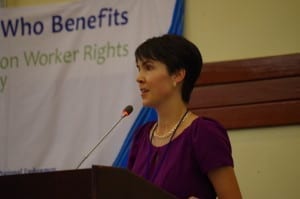 Describing Immokalee, Florida, as “not a town, but a labor reserve,” Tan outlined CIW’s path breaking Fair Food Program, which CIW negotiated with growers and which 14 major corporations have signed. Under the code, which covers as many as 100,000 workers in a year, farms must comply with fundamental labor standards, including preventing violence and sexual harassment at work. Corporations agree to buy only from farms that comply, and auditors annually evaluate the farms.  Some 90 percent of Florida tomato growers have signed on to the program.

Closing the panel, Chidi King, International Trade Union Confederation Equality Department director, told participants: “We as a labor movement have not done enough to bring (gender-based violence at work) to the fore of our agendas. We still see this as a personal issue,” not one to be dealt with at the organizational level. 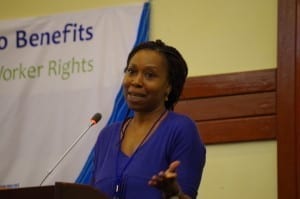 “When you’re talking about your organization’s activities, have this front and center. It cannot be an issue we continue to remain silent about.”

More than 200 participants are taking part in the Aug. 10-12 event, Labor Migration: Who Benefits? A Solidarity Center Conference on Worker Rights & ​Shared Prosperity.