Plenary Leadership, Transformation and Labor Rights: The Essential Vision and Role of Women 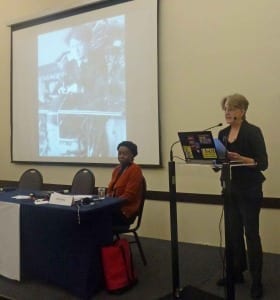 Plenary
Leadership, Transformation and Labor Rights: The Essential Vision and Role of Women

Chidi King opened the panel by saying the conference is timely because “this is a time when the trade union movement needs transformation.”

Dorothy Sue Cobble began by overviewing the women’s labor movement, which she described as having “a rich and vital history,” one that is inspiring because it is a long story of transformational leadership. Labor union foremothers forged a distinctive vision of social change, and a working women’s political movement. Labor feminism differs from more elite feminism because it:

• Pursued full development of each individual—women workers are truly free only when all around them are free.
• Saw individual and collective progress as intertwined—one cannot be accomplished without the other.
• Sought to go beyond gender equality.  Labor feminism believed women workers faced discrimination and other injustices and wanted to dismantle multiple sectors of economic inequality.
•  Offered a global vision.

Sally Choi: “As feminists, we believe the pesonal is political.” Credit: Matt Hersey

Sally Choi: “As feminists, we believe the pesonal is political.” Credit: Matt Hersey

Cobble then overviewed her findings from a 2012 Solidary Center-commissioned report, “Gender Equality and Labor Movements: Toward a Global Perspective.” She noted that there is a “startling lack of global data” on women’s membership and leadership in trade unions and even less data on women’s membership and leadership in new worker movements around the world. She also noted significant problems with data, including unrealistic, inflated, different definitions of union/union membership; and underestimation of women’s collective organization outside “official trade unions.” Some of her findings include:

Women have made progress in unions but “we are progressing at two speeds. “There’s a fast lane and a slow lane, with one wing of the labor movement having made a lot of progress and another wing where there is actually very little change,” Cobble said. Unions making most progress or the “best practice” cases rely on top-down pressure— “reserve seats” for women and other measures—as well as bottom-up pressure, “self-organization” among women and active women’s committees, conferences and other woman-only spaces.

Sally Choi noted that “as feminists, we believe the personal is political,” and provided two narratives to illustrate her evolution as a labor feminist. In the first, she described her own early sense of the need to fight for gender equality and how her vision was shaped by Yim Yuet Lin, who founded the Hong Kong Women Workers Association in 1989, the first organization in Hong Kong, Special Administrative Region of China for rights of women workers.

In her second narrative, Choi discussed the formation of the HKCTU women’s committee and its efforts to achieve legal reforms addressing sexual harassment for workers who provide services goods and facilities providers. She also noted the need to focus more outreach efforts among the increasing numbers of women workers in the informal economy and the benefit of empowering strong and vocal women leaders as well as committed activists who may be less vocal but are key power builders in the movement.

Choi emphasized the important role of feminist activists outside and inside the labor movement in pushing unions over the years to integrate women’s concerns more deliberately and effectively.

Mtsweni described herself as a gender activist with a trade union background. She started participating in union actions in the 1980s during apartheid, a time when women—especially because of gender, race and class—but also men, were highly exploited. Women working as domestic workers and migrant workers sometimes were not paid wages, but given shelter and food. She struggled against stereotypes in a male-dominated environment and within sexist structures that saw women as objects.

“The working-class will never receive their rights on a silver platter, but must fight bitter struggles to secure, to defend and to advance their rights,” she said. She praised the Solidarity Center for “coming on board to move away from theory to action.”

Showing a photograph of a woman beaten for going on strike in 1995, Mtsweni said the struggle for gender equality is part of the broader story—therefore all working class women and men must make up the struggle equally. She said that in South Africa, capital is doing everything to reverse workers’ gains—even legal gains. Another key challenge is elimination of traditionalist attitudes and resistance to change by women and men. The union movement also must dismantle broader organizational structural inequalities.

“Gender relations transformation is not about attitudes, but about broader organizational structural inequity,” she said. “Therefore the main focus of the organization must be to dismantle the structure of gender inequality.” Mtsweni listed COSATU’s numerous efforts to institutionalize gender equality and its campaigns for policies to support working women.

Mtsweni concluded that a sexist struggle cannot produce a society free from sexism. “Addressing gender issues sometimes means you have to tackle unpopular decisions because we understand the class issues.” Gender issues are linked to other development issues, she said, and multinational companies should not use gender as a tool to weaken workers’ movement internationally. She also pointed to the need for unions for increase their focus on assisting workers in the informal economy, and the need for international and cross-border solidarity. In sum: “Gender equality is a ‘struggle within a struggle’.”