Too many governments are using the money migrant workers send back home to fuel their economies rather than create good jobs that would build and support their communities, according to panelists at an afternoon plenary session at the Solidarity Center conference on labor migration.

“One of the key drivers of migration is lack of stable employment,” says Greg Randolph, deputy director of the India-based JustJobs Network. 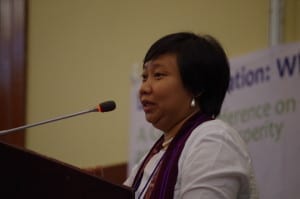 “Migration is still not having a positive impact for communities,” says Hidayah.

Both Hidayah and Randolph discussed the need for a new development model in which governments focus on job creation and supporting workers from the village-level on up, rather than trickle down benefits from the national level.

Randolph described the results of a new JustJobs study that examined migration in the Indonesian province of West Nusa Tenggara which sends the highest ratio of its population for overseas work. It found that wages sent home by Indonesians who migrate for work are not supporting local job creation in origin communities. Further, it finds that the poorest communities in Indonesia are most likely to send migrants into informal economy jobs.

Noting that remittances can reduce poverty, Randolph reiterated that they have not furthered the type of development that creates good jobs.

“We need to move toward a paradigm where migration is a choice rather than a compulsion,” he said, echoing other speakers throughout the three-day conference.

Speaking from the floor, Agatha Tan, counsel for the Coalition of Immokalee Workers, pointed out the role of financial institutions in the labor migration process

“When we talk about remittances, we forget about how much role financial institutions play,” she said.

Hidayah outlined how Migrant Care is working at the village level to educate workers on their rights before they migrate, while providing them with online tools for reporting employment abuses and other forms of exploitation.

Randolph also showed a video based on the report, Labor Migration and Inclusive Growth: Toward Creating Employment in Origin Communities, which was produced with funding by the Solidarity Center and U.S. Aid for International Development.