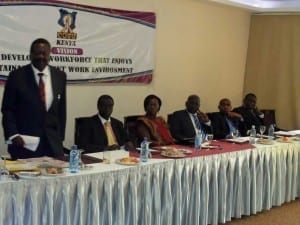 The forum was organized by the Central Organization of Trade Unions (COTU-Kenya), the national trade union center, and the Solidarity Center. Forum organizers noted that educated voters are less likely to cast ballots along ethnic identity lines, which has been past practice in many parts of Kenya.

Some 50 union leaders representing all sectors of the Kenyan labor movement attended the event in the nation’s capital, Nairobi. Candidates discussed how their platforms would address four areas key to working people: job creation, social services, health care and sustainable economic development. The following are summaries of the candidates’ remarks.

Presidential candidate Paul Muite from the Safina party cited unemployment, insecurity and ethnicity as major concerns that require urgent attention. He promised that a Safina presidency would work to improve the country’s infrastructure and protect worker rights.

The nation’s problems stem from corruption, poor governance and criminal impunity, said Martha Karua of the Narc-Kenya party. A Narc-Kenya presidency would uphold the law, ensure that the constitution in fully implemented and judiciary reforms are completed, she said. Such actions would enable all Kenyans to live in dignity and enjoy health from cradle to the grave. Karua also said her government would review the salaries of the lowest income-earners and ensure they are pegged on the cost of living.

A newcomer to the political scene, Joseph ole Kiyiapi of the Restore and Build Kenya party said his government will focus on improving food security and the environment and on enhancing the government management. He will invest in education and ensure that young people have appropriate skills for the job market.

Deputy Prime Minister Musalia Mudavadi, part of the Amani coalition, said sustainable job creation would be a cornerstone of his government. Mudavadi had been quoted in the press as favoring privatization of the nation’s major port. Here, he clarified that he does not support selling state assets to foreigners but would encourage everyone, including workers, to own shares in companies.

Presidential candidate Mohammed Dida of the Alliance for Real Change (ARC) pointed out that Kenya lacks good governance and he will strategize to improve the health of the nation and improve food production. By addressing corruption, he said, youth unemployment can be drastically reduced.

Musyoka, from the CORD coalition, stated that job creation and expanding business at the national and county levels are part of CORD’s manifesto. CORD will seek an employment policy that protects workers, respects the freedom of association and prioritizes job creation for Kenyans rather than foreigners. CORD also seeks to make Kenya an investment destination. He added that CORD will endeavor to provide universal health care and work with COTU and its members.