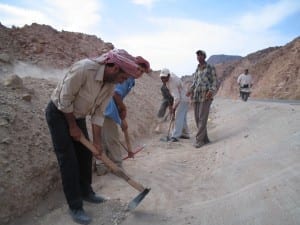 A wide range of workers are now part of the new Federation of Independent Trade Unions of Jordan (FITU-J).

The conference theme, “Freedom of Association is a Necessity,” underscored how, as Jordanian workers have participated in multiple labor strikes for the right to form unions over the past four years, they are part of the country’s broader movement for democratic change. Although the Jordanian constitution upholds International Labor Organization (ILO) conventions on freedom of association, Jordanian labor law allows trade unions in only 17 sectors designated by the Ministry of Labor.

During the one-day congress, delegates elected as president Azzam Smadi, retired president of the Independent Phosphates Workers Union. Delegates ratified a constitution and articulated principles and priorities, including the goal to pass legislation expanding access to freedom of association and social security. Conference delegates also demonstrated the importance of involving women in the union movement by establishing the FITU-J women’s committee, headed by Wijdan Abu Ighanam, a  member of the independent Electricity Workers Union.

The 218 delegates at the April 26 convention were joined by international guests, including a representative from the United Auto Workers Global Organizing Institute and representatives from the ILO Bureau for Workers’ Activities (ILO-ACTRAV), Public Services International (PSI), and independent unions from Algeria and Kuwait. AFL-CIO President Richard Trumka sent a letter of support and AFL-CIO International Department Director Cathy Feingold taped a video greeting.