Youth Representatives of Brazil's CUT at a May Day Rally in 2017. Photo Credit: Maria Robalino.

Among the millions of Brazilians who waged a recent 24-hour general strike to protest proposed legislation that would weaken labor regulations, many were young workers, some newly mobilized by the government’s attempts to impose drastic cuts on pensions, salaries and social security and dismantle labor rights, including provisions on vacations, overtime and working hours.

“The labor law reform bill being debated in the National Congress penalizes mainly young people and specifically young black workers, as young workers are primarily employed in precarious jobs and are the majority of the unemployed,” says Julia Reis Nogueira, national secretary of Racial Equality in Brazil’s Central Workers’ Union (CUT), a Solidarity Center partner. “When you put together the generational and racial question, this group will be the main victims of this disastrous reform.” 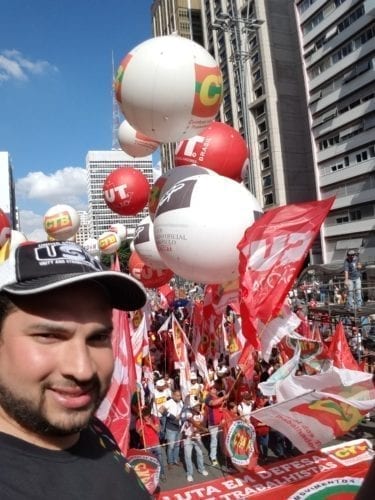 “Any of these ‘reforms’ will make it hard for young people to retire with dignity,” says Al Vega, director of policy and programs at MASSCOSH, where he focuses on strategies for bringing young adults into the U.S. labor movement. “The economic climate has really mobilized young people. They do feel like it is an all-out attack on the working class.”

Vega, 35, was among four U.S. participants in a recent youth and race exchange delegation sponsored by CUT and the AFL-CIO. Over five days, they learned about Brazil’s current political, economic and social environment and heard firsthand about the challenges facing young workers, especially those of Afro-Brazilian descent, in seeking good job and an end to rampant discrimination.

“Institutional racism is keeping them from jobs,” says Vega.

Rampant discrimination is behind much of this disparity. It is still common for firms to require pictures on resumes, and to make skin color a preference for selection processes. Workers’ educational levels make little difference: Afro-Brazilian men with a college education were paid only 70 percent of the wages made by white Brazilians. Afro-Brazilian women with a college degree receive only 41 percent of salaries paid to white Brazilians.

The economic struggles of Afro-Brazilians are framed within the country’s long legacy of slavery, which manifests in continuing brutality: One Afro-Brazilian youth is killed every 23 minutes in what some have called an “undeclared civil war,” according to a 2016 report by a Brazilian Senate committee. The committee issued the report in response to “a culture of violence based on racism and prejudice.” A Human Rights Watch report found that police in the state of Rio de Janeiro killed more than 8,000 people between 2006 and 2016, including at least 645 people in 2015—and three-quarters of those killed by police were black men.

Young Afro-Brazilians seeking jobs are doubly disadvantaged, with unemployment for all young adults (ages 15-24) nearing 25 percent in 2016. When young workers do find jobs, half are in the informal economy, where wages are low, work often dangerous and job stability non-existent.

The crisis for young workers is a crisis for Brazil: Nearly one-quarter of the country’s working population was between ages 15 and 24 in 2012.

Young Workers Standing up for Their Future 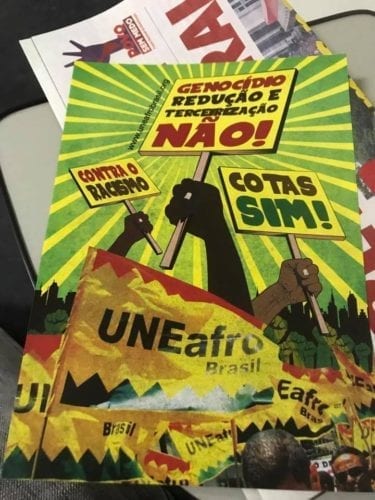 Young people know “there’s no hope for them if they don’t change the system,” says Vega. “They want to figure out how to get more and more young people involved. This is not the time to be on the sidelines. This is the time to get involved.”

In Brazil, a deep economic recession brought on by plummeting export commodities prices and increased inflation are manifesting in increasing unemployment, now at a record high of 13.7 percent. More than 14.2 million Brazilians were without a job in March. With young workers and workers of color especially hard hit by rising unemployment and proposed legislation that would undermine fundamental worker rights, they are standing up for the their future by mobilizing in the streets and through unions and other associations.

Vega, a member of United Steelworkers (USW) Local 9358 and young worker representative on the Massachusetts AFL-CIO Executive Board, was energized to hear from Brazilian delegates representing the Chemical Workers, Bank Workers, Teachers, and Retail and Commercial Workers Union Confederations who shared organizing strategies to reach youth of color in Brazil.

The unions are all members of CUT, Brazil’s largest labor federation, which was founded by rural and urban workers in 1983 as part of the ongoing struggle against the military dictatorship, which took power in 1964. In 2009, CUT created a National Secretariat for Youth and a National Secretariat of Racial Equality. Both secretariats functional locally in all 27 Brazilian states. This structure “has enabled a permanent dialogue between national and state-level youth leaders, in order to collectively construct policies and actions to promote the working youth in the country and to combat racism,” says Reis Nogueira.

“I was getting inspired to see these young people have representatives across Brazil,” says Vega. “That’s one of the key things I heard—because they have those formal positions, they can make sure their issues are being connected.” 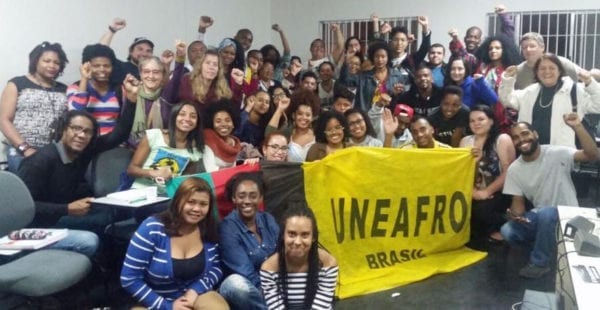 Brazil unions are partnering with a range of organizations with common goals. Credit: Courtney Jenkins

The delegation, which traveled to Brazil at CUT’s invitation, is part of the federation’s outreach strategy.

Other U.S. participants included Rachel Bryan, an Electrical Workers union member engaged in criminal justice reform work; Sheva Diagne from the AFL-CIO; and Courtney Jenkins, a Postal Workers union member who is president of the Coalition of Black Trade Unionists’s Baltimore chapter and coordinator of the young worker program in his union.

Says Vega: “The overall experience was very eye-opening, inspirational, to see what a labor movement can look like when there is a true belief in what they want to achieve.”