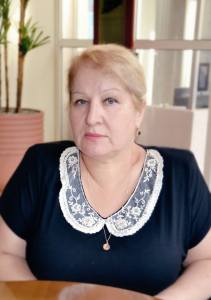 Eteri Matureli, vice president of the Georgia Trade Union Confederation (GTUC), knows how difficult it is for women to rise through the ranks of union leadership.

Eteri Matureli knows how difficult it is for women to rise through the ranks of union leadership. Elected vice president of the Georgia Trade Union Confederation (GTUC) in 2009 and now director of the GTUC Women’s Committee, Matureli said she “had to build a long resume” before she could win the trust of national and local trade union leaders and activists and convince them that she was an active trade unionist who deeply believed in union values and would stand strong in the face of employer and government pressure.

Women make up 60 percent of GTUC but “unfortunately, this is not reflected in almost all of trade union decision-making bodies,” she said in a Solidarity Center interview during the recent conference, “Women’s Empowerment, Gender Equality and Labor Rights: Transforming the Terrain.”

Of the 26 GTUC board members, six are women. Three of 21 GTUC-affiliated unions are headed by women. Several union activists who spoke at the gender equality conference said gender parity clauses in their union constitutions had been key to women’s advancement to leadership positions, but Matureli said the GTUC has no gender parity clause. Further, the confederation also cannot mandate that its affiliates apply gender equality in leadership positions, although it can develop recommendations that they do so.

Women have made some strides since the election of the Georgian Dream coalition in October 2012. The government this year drafted amendments to its labor code to bring it closer in line with International Labor Organization (ILO) conventions and submitted them to Parliament for ratification. Working with the Solidarity Center, the GTUC analyzed the current law and offered changes to improve worker rights protections.

The new labor code, which passed Parliament and was signed into law this summer, makes it illegal for employers to fire pregnant women. Matureli said the GTUC is working with lawmakers in drafting a second batch of labor code amendments that will further bolster protections for working women.

The GTUC also is working on programs to address the wage gap between women and men in Georgia, where women do not have access to family-supporting jobs and where unemployment, officially at 16 percent, is realistically closer to 30 percent, according to Matureli. Desperate to support their families, “women are willing to work for lower pay and take any job,” she said.

Matureli, who became involved in union work in 1985, when she was elected chairperson of the City Committee of the Utility Service Workers Trade Union, started out as an employee at a jewelry factory in Tbilisi, Georgia’s capital. She says the gender equality conference has inspired her to dedicate 2014 Workers Memorial Day activities to the more than 1,200 Bangladeshi garment workers killed in the Rana Plaza building collapse in April—both to commemorate their lives and highlight the need for job safety and health measures to ensure such tragedy does not happen again.