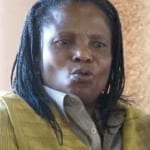 Each day this week, leading up to International Women’s Day March 8, the Solidarity Center is highlighting an example of how women and their unions are taking action to improve women’s lives on the job, in their unions and in their communities.

Unions around the world are at the forefront of the struggle for gender equality. And sometimes, that means taking a look at their own structures, policies and practices to ensure they, too, are working  to make equal treatment and non-discrimination central to their efforts.

In South Africa, four unions grappling with the complexities of gender inequality took part in a structured, multiyear process facilitated by the South Africa Gender Action Learning Program. The group is part of Gender at Work, a global nongovernmental organization that helps organizations become models for a more equitable and accountable world.

The unions—which represent building and construction workers, health care and retail workers and farm workers—recognized that male-dominated, hierarchical, union culture does not easily address issues such as sexual harassment and violence against women within the union, and they sought to develop alternative models of power. The process involves feminist popular education, interactive learning and a lot of work “at the consciousness-raising level,” said Nina Benjamin, who led the project which, for one union, began in 2005. Benjamin is gender research program coordinator for Labour Research Service/Gender at Work, South Africa.

A recent Solidarity Center-sponsored report, “Bringing Back the Heart,” explores the Gender at Work process with these unions and details how the partnerships achieved tangible results:

• Increasing numbers of women joined the unions,
• More women ran for union leadership positions,
• Union leadership gained a deeper understanding of worker concerns and became more accountable in addressing them, and
• Union activists reported that the process reinvigorated and re-inspired them, even in the face of widescale workplace restructuring and deteriorating working conditions.

The process ensured that gender work was not relegated to the status of an “add on.” Leaders developed unionwide strategies for achieving gender equality—and made notable progress.

• The South African Commercial Catering and Allied Workers Union (SACCAWU), which organizes workers in the hospitality, catering, retail, service, tourism and finance sectors, includes a majority of women as members—but few had been union leaders.  Following its partnership with Gender at Work, women routinely ran for and were elected into key leadership positions at the worksite level.

• The autonomous, women-led trade union, Sikhula Sonke, reported that membership was growing, domestic violence was decreasing and union leaders were tackling broader discrimination issues (such as xenophobia, homophobia and HIV). The union, which organizes those who live and work on fruit and wine farms, also found farmworkers’ daily lives were improving and they were gaining access to new resources.

• The predominantly male construction union, the Building, Construction and Allied Workers Union (BCAWU) engaged key male leaders in the Gender at Work process, with the result that more women have joined the union, and they now increasingly participate in the union, such as by becoming shop stewards.

• Health and Other Service Personnel Trade Union of South Africa (HOSPERSA), which represents public and private health-care workers, primarily nurses, expanded its reach to grassroots members. Together with union leaders, they are building a new culture of unionism—broadening campaigns from a focus on wages to include issues central to the lives and work of its predominantly female membership.

These four unions demonstrate the challenges of organizational change, but their experiences also show that even in unions with diverse memberships and experiences, a focus on gender equality can empower women and return the balance of power back to members.