To promote the rights of women workers, especially women domestic workers and women farm workers, it is essential to seek solutions to build women’s capacity to defend their rights to equality, decent work and an end to violence and abuse, according to Hind Cherrouk, Solidarity Center director for North Africa as she opened a three-day forum in Casablanca, Morocco, this morning. 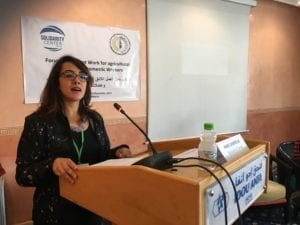 “This forum is an opportunity to build solidarity between women domestic workers and farm workers,” says Cherrouk.

“We express our solidarity with our sisters who are migrants,” says Saida Bentahar. “We will always stretch our hands out to help them. We are going to remove the pressure of discrimination against our sisters wherever they are.” Bentahar, a Democratic Labor Confederation (CDT) women’s committee member, works to empower farm workers in Meknes El Hajeb, Morocco.

Some 30 worker rights advocates from countries that include Jordan, Kuwait, Lebanon and Morocco are meeting to discuss how such factors as gender, ethnicity and race are used to deny workers their rights and, ultimately, to build the connections and solidarity needed to take on the power structures that profit from their marginalization. The November 29–December 1 Forum on Decent Work for Agricultural Women and Domestic Workers is sponsored by the Solidarity Center and the CDT. 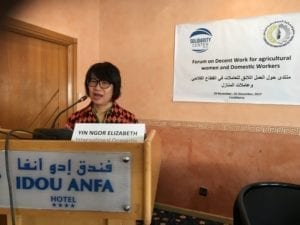 “If domestic workers stop fighting, then the convention will just be a nice looking paper,” says Tang. “So we decided to form a permanent union of domestic workers so we can keep fighting in unity so we can speak in one voice.” IDWF now includes 65 affiliated organizations in 53 countries.

More than half of the workers around the globe are not employed in the formal economy. Yet most informal economy workers, such as those cleaning houses and toiling on farms, have little access to decent work—which includes family-supporting wages, safe workplaces and social protections like paid time off and pensions. Decent work is one of the United Nation’s sustainable development goals, a series of targets the UN hopes to achieve by 2030.

Representing a range of unions and associations assisting workers throughout the Middle East and North Africa, participants described the challenges they face as domestic workers and agricultural workers and how, as worker rights activists, they are facilitating efforts through their organizations to achieve decent work. 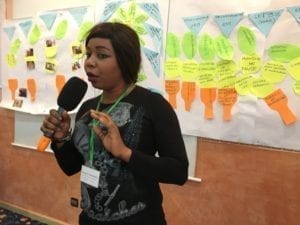 Camara Hassanatou, a domestic worker in Morocco, described how her employer forced her to work without rest. Credit: Solidarity Center/Tula Connell

Of the more than 150 million migrant workers in the world, 11.5 million are migrant domestic workers. Primarily women, domestic workers provide essential support to families, cleaning homes, cooking meals and taking care of children. Yet their isolation makes them especially vulnerable to abuse and exploitation.

“I asked my employer how long I will work,” says Camara Hassanatou, an African migrant worker in Morocco. “ ‘You will work as long as I tell you,’ she said.” Hassanatou accepted the job because she needed to support herself. Yet she received no time off, even when she was ill.

Now an activist with the Coalition of Migrant Workers in Morocco (CTMM), Hassanatou joined participants in small group discussions in which domestic workers and farm workers shared their challenges. The women discussed how migrant domestic workers often are recruited by labor brokers who lie to them about the wages and working conditions in destination countries. After they are arrive in another country, their passports and mobile phones often are taken, trapping them in employment situations where they often face physical and sexual abuse, while forced to work long hours with no time off. 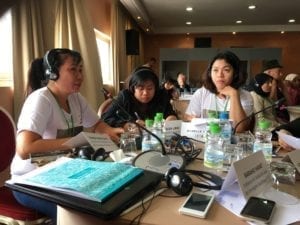 Former domestic workers from the Philippines were trafficked to Morocco and now are part of the Instance of Solidarity with Asian Workers. Credit: Solidarity Center/Tula Connell

Romaric Hocine, a member of the CTMM, which was formed in 2013, outlined how the organization works to educate migrant domestic workers about their rights. Under a recent legalization campaign by Morocco, migrant workers who have been employed for five years in the country, among other criteria, were eligible for amnesty if they applied in 2014 and 2015 and renewed in 2016. CTMM activists reached out to workers across the country to enable them to get formalize their status and attain basic rights.

Leadership training is central to the coalition’s work: “It is essential to develop leadership among migrant workers so they can defend their own rights,” he says.

From Kuwait, where two-thirds of its population is comprised of migrant workers, Mai al Tararwah, a lawyer with the Humanitarian Foundation for Legal Aid, described how a team of lawyers works to assist domestic workers and other migrants with legal support and vocational training. Farah Abdullah from the National Federation of Employees’ and Workers’ Unions in Lebanon (FENASOL) discussed the union’s objectives, which include creating “an independent structure for migrant domestic workers” in that country, where an estimated 250,000 migrant labor as domestic workers. 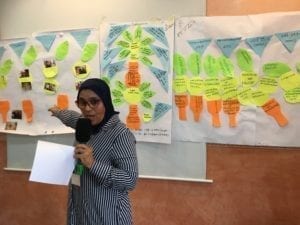 Many workers on agro-industrial complexes are seasonal employees and, like domestic workers in many countries around the world, they are not covered by national labor laws guaranteeing minimum wages and social protections like pensions and paid time off.

Yet women working in agriculture “are being dismissed without pay, without severance, without justification with the stroke of the employer’s hand,” says Bentahar. “If they feel that the margins do not add up, employers will quickly lay off of women workers.”

Globalization has strengthened the negotiating hand of corporations at the head of supply chains. Faced with pressure to maximize profits, factory and farm managers typically pass on the costs and risks to the weakest links in the chain: the workers they employ.

Participants agreed that although domestic workers and farm workers may face different challenges, the common thread uniting their struggles is a lack of worker rights. But as Bentahar pointed out, unions provide a key path forward for many workers.

“Things are changing,” says Tang. “You don’t have to look very far. Just look at yourselves.

“Together, we will make change.”

Stop back tomorrow for more coverage of the Forum on Decent Work for Agricultural Women and Domestic Workers.