Former Child Domestic Worker: ‘No Where to Run and Get Help’ 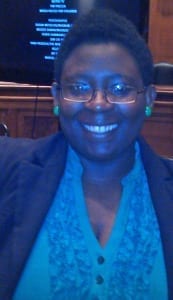 At age 9, Evelyn Chumbow was trafficked overseas from Cameroon to become a domestic worker for a family in Maryland. She worked from 6 a.m. to midnight, seven days a week, was forced to sleep on the floor without a room of her own and regularly beaten. Each day, she took her employer’s children to school, but was not allowed to attend. At 17 she escaped, but had no identification and didn’t know her birthday or age.

“There was no where to run and get help,” says Chumbow. Now a student at the University of Maryland, Chumbow spoke at a briefing yesterday on Capitol Hill in Washington, D.C., where panelists discussed efforts to address child labor, especially among domestic workers.

Some 168 million children toil in fields, in brick kilns and at industrial settings around the world, receiving little or no formal education and likely to remain in the cycle of poverty that led to their arduous labor. Although child labor has decreased globally in recent years, child labor in domestic work has increased by 9 percent in the past four years, Jo Becker, advocacy director at Human Rights Watch, said at the briefing. The International Labor Organization (ILO) says nearly half of child domestic workers are under age 14, and nearly all are girls.

The briefing, “Promoting the Rights of 15 Million Domestic Workers,” hosted by a bipartisan group of U.S. Senate and House members, marked World Day Against Child Labor. Observed each year on June 12, the day is a time to remind the world about the plight of child laborers and spur action to end the scourge. The Child Labor Coalition and the Alliance to End Slavery & Trafficking (ATEST) sponsored the event.

Tiffany Williams from the National Domestic Workers Alliance (NDWA), pointed out that child labor in domestic work involves a similar “pattern of abuse” around the globe: Employers hold the workers’ passports, making it difficult for them to leave; workers are paid low wages or sometimes not paid at all and are forced to toil for long hours, working weeks or months without a break. David Diggs, executive director of Beyond Borders, also took part in the panel.

Many child laborers who work in domestic service also are trafficked, as Chumbow was, a point made by Tim Ryan, Solidarity Center Asia Regional Program director, who moderated the panel. Many labor recruiters charge exorbitant fees for their services, forcing workers into debt bondage, falsify documents and deceive workers about their terms and conditions of work increasing vulnerability to human trafficking.

Around the world, millions of workers are unable to find jobs or are paid wages too low to support their families—and many children work to help their families survive.

They turn to work in the informal economy, where pay is erratic, workplace safety and other labor laws do not apply, and the social protections granted to formal economy workers are non-existent.

“As a society, we have to ask why this is happening,” said Williams. “Domestic work is one of the few ways less educated women can care for their families.”

Eliminating child labor will succeed in large part when adults have decent work—a connection recognized by participants at last year’s Third Global Conference on Child Labor. The Brasilia Declaration, issued at the International Labor Organization-sponsored conference, calls for “measures to promote decent work and full and productive employment for adults” so that “families are enabled to eliminate their dependence on the income generated by child labor.