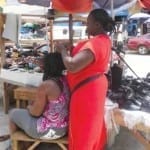 Nearly 40 trade union leaders from Africa are meeting in Washington, D.C., over coming days for a series of events to highlight the concerns and needs of working people throughout sub-Saharan Africa.

On Monday, Liberian union leaders will take part in the panel “Trade Unions and Democracy from Below,” at the all-day “Empowered Africa” conference at Howard University, which is open to the public. Other events include forums on promoting decent work, inclusive development and a discussion on the Africa Growth and Opportunity Act (AGOA).

As a recent report by the AFL-CIO and Solidarity Center points out, in the 15 years AGOA has been in effect, it has increased exports from sub-Saharan Africa but has not spurred broader development or fostered a robust and equitable economic system.

Naome Chakanya, an economist with the Labor and Economic Development Research Institute of Zimbabwe (LEDRIZ) who will be among trade unionists in Washington, says workers are looking for “trade agreements which do not compromise the government’s ability to adequately provide social services (public goods) which include health, education, water, electricity.”

AGOA is due for reauthorization in September 2015. Reauthorization represents an opportunity to promote a coherent regional policy that benefits African workers and communities and addresses the challenges of a changing global economy. The White House Summit also includes an AGOA forum with finance and treasury ministers.

Achieving decent work also requires innovative approaches to addressing the informal economy, one of the key points in a new Solidarity Center report. Based on a 2013 survey of trade unionists in nine African countries, the report calls for worker associations and African governments to share experiences and invest more resources to empower workers in the informal economy and extend social protections to informal-sector workers, especially women. National and global economic trends suggest that more and more workers will seek to make a living in the informal economy in the face of fewer permanent, formal-sector jobs.

The report, “African Trade Unions and Africa’s Future: Strategic Choices in a Changing World,” also calls for enforcement of existing international worker rights standards. A broad body of international and national laws and standards protects workers and their rights, but they generally are not enforced, including by countries participating in programs like AGOA. As a result, workers are vulnerable to abuses such as unsafe and unhealthy workplaces, forced labor, lost wages, sexual harassment and workplace violence.

You can follow events throughout the week on Twitter with the hashtags #USAfrica, #AfricaSummit and #WeAreAfrica, and check back here for updates.