Decent Jobs at Home Means Not Risking Your Life Abroad

If working people could find good jobs, they would not be forced into a desperate search for employment in other countries, a process that means they often are exploited and abused, says Caroline Khamati Mugalla, executive secretary of the East African Trade Union Confederation (EATUC).

“If I have a decent job at home, I will not risk my life” to move for a job, she says. And unions are key to achieving decent work because they empower working people to join together to achieve living wages and safe working conditions. 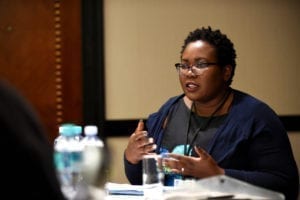 If working people could find good jobs, they would not be forced into a desperate search for employment in other countries—Caroline Mugalla, EATUC Credit: Solidarity Center/Evidence Holdings

Mugalla spoke today on the podcast, Working Life, where host Jonathan Tasini discussed labor migration in Africa, which involves the majority of the 34 million migrants across the continent.

Migrant workers contribute to growth and development in their countries of destination, while countries of origin greatly benefit from their remittances and the skills acquired during their migration experience.

Yet workers who migrate for jobs may be exploited by labor brokers who promise a job with good wages. When migrant workers arrive at their destination, says Mugalla, their passports often are taken and they are forced to work in low-paying, back-breaking jobs that bear no reality to what they were promised. Unions also push for decent work in destination countries, where they work with migrant laborers to ensure they know their rights and have access to legal and social support.

Informal economy workers—market vendors, domestic workers—often are migrant workers. In East Africa, she says, the 7 million labor migrants are paid an average wage of $1 a day—enough to buy one meal—and live in cardboard houses with no plumbing.

“The informal economy does not give me access to basic, fundamental rights of an employee,” says Mugalla. “I do not have social security protection, I do not contribute to any pension scheme, I do not even earn a minimum wage.”

“Labor migration powers the world economy and lines the pockets of greedy corporations,” says Tasini. “The greed of corporations is a worldwide cancer and forced migration is also a tool of racism,” he says, pointing to the centuries’ long global slave trade.

Unions working to ensure that when migrant workers, who fuel the global economy, have full labor rights, standards will rise for all workers.

Listen to the full podcast.